As a student of his craft, James Castoro always possessed a superior skillset to become a top goalkeeper.

When he found his voice on the field, it just put him into a higher orbit.

“It’s given myself more confidence,” the senior goalkeeper said in a recent interview. “It took me quite a while to find my voice but once I did, I was very comfortable with using it. It’s definitely helped me progress to the next level because being vocal is very important in net.”

The 17-year-old goalkeeper credits the Rough Riders owner Peter Zaratin, who was one of the top keepers on the Long Island when he played, for helping him make great strides.

“I wasn’t like the loudest kid,” Castoro said. “He kind of pried that out of me. He’s taught me a lot. He made sure I talked n games and helped me enforce it in games.”

Zaratin had Castoro compete in adult leagues, which helped him come out of his shell.

“His parents were always like Pete, ‘How can we get him talking more?’ ” Zaratin said. “I’m like, ‘Well, get him into uncomfortable situations, get them playing with men.’ “

Added Hofstra University men’s head coach Richard Nuttall: “He gradually got better and better and came out of his shell and became a very good performer in the nets.”

Nuttall should know. He coached Castoro for two years on the Long Island Soccer Club and was quite satisfied with the goalkeeper’s progress.

“He seemed to have a certain natural ability to be in the right place at the right time and be quite agile and made a lot of great saves,” he said. “When they [the opposition] started bearing down on him, he’s probably going to save this. He was good with his feet and decent on crosses.

“I haven’t seen him play it for a year or so. I’ve heard good things about him. He’s doing very well.”

While many young players wind up keeping goal in an emergency situation when the regular netminder is injured or doesn’t show up, Castoro took to the position very early and very quickly. You can call him a natural goalkeeper.

“Ever since I was younger, I’d like to throw myself around, just diving for the ball,” Castoro said. “I know I wasn’t really worried [or] scared hitting the ground and that’s what kind of made me stand out when I was younger. As I got older, my love for the position kept on growing each time.”

It showed on and off the pitch.

When he trained a nine-year-old Castoro and other young goalkeepers at a Rough Riders clinic several years ago, Zaratin noticed how quickly he picked up basic drills and skills.

“The kid that was like a sponge,” Zaratin said. “He went home and made sure he could almost do it exactly from a demonstration standpoint, until the point where I didn’t want to dive anymore. I would just say do it like James. See how James did that? He could almost replicate it perfectly.

“He’s learned the craft really well and to the point where you can coach it. … It’s great to see and it’s just amazing to see someone who was probably eight or nine now to a young adult.”

The six-foot, 176-lb. Castoro has demonstrated goalkeeping techniques and being a mentor as well, which helped him develop his game.

“It’s given me a lot more confidence,” he said. “Now I feel I know exactly what I’m doing. Although there is still more to learn, I feel with teaching, you can learn new stuff each day. And it’s very enjoyable to do.

“There was a time where I was actually trained a kid one on one and it kind of made me realize that I was the best possible goalkeeper I could be at my age. It really helped me.”

So far, so very good this high school season.

Castoro has backstopped Garden City to a 13-0-0 record this season as the team captured the Nassau County A West Division crown with a 10-0-0. The Trojans outscored their opposition in league play, 28-3. They have conceded just six goals, including the playoffs. 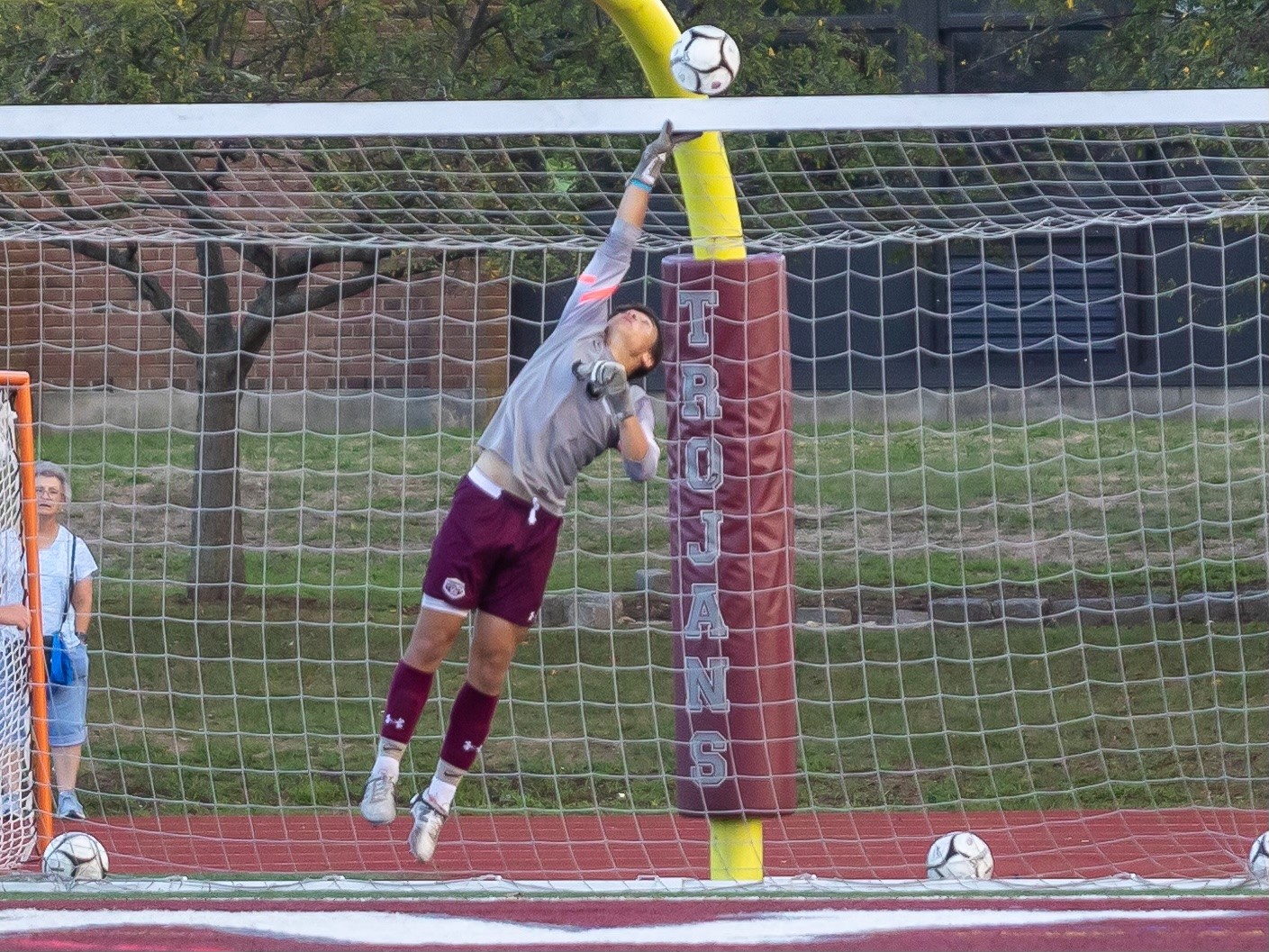 Garden C recorded three victories on their march to the Nassau County Class A final against Glen Cove H.S., which is set for the Mitchel Athletic Complex in Uniondale, N.Y., on Wednesday, Nov. 2 at 8 p.m., which is not far from the Rough Riders’ headquarters.

After receiving a first-round bye, Garden City has posted three wins, over Valley Stream in the second round, 6-1, Lynbrook in the quarterfinals, 4-1, and Mepham in semifinals, 1-0.

“The season’s gone very well,” Castoro said. “We stay organized in the back. We don’t get on each other. But like we get on each other and like not like the yelling way. We always try to keep a positive mindset. If we do yell at each other and then next play, we do something good, we make sure that we praise our teammate for doing the correct thing. Hopefully, the season goes on for as long as possible.”

Castoro’s goalkeeping and leadership in the back has been a major factor in his team’s success.

“When I step onto the soccer field, all I think about is just the game,” he said. “Everything else on my mind goes away. I just enjoy being on the soccer field. I can’t get enough of it.”

Castoro has plans to attend college and hopes to attend the U.S. Merchant Marine Academy in nearby Kings Point, N.Y. His favorite course at school is mathematics, although Castoro hasn’t made up his mind on whether he will major in it in college.

If he needs a recommendation, he’s got a pair of respected coaches in his corner.

“He’s a lovely young man who was never one ounce of bother,” Nuttall said. “All he did was come and work. So, whatever he gets a deserves.”

“James is just a good solid kid who’s not a kid anymore, but a solid citizen,” he said. “You can see that he’s going to go far.”