If there is one constant in the history of the Long Island Rough Riders, it is that they have been competitive at worst and playoff worthy at best in practically every season. They have either qualified for the playoffs or came close to reaching the postseason while never finishing below .500. Given how quickly USL League Two teams change from one season to the next, that certainly is no mean feat.

Besides the Riders’ usual league success, the team also has enjoyed a memorable moment or two in the Lamar Hunt U.S. Open Cup. 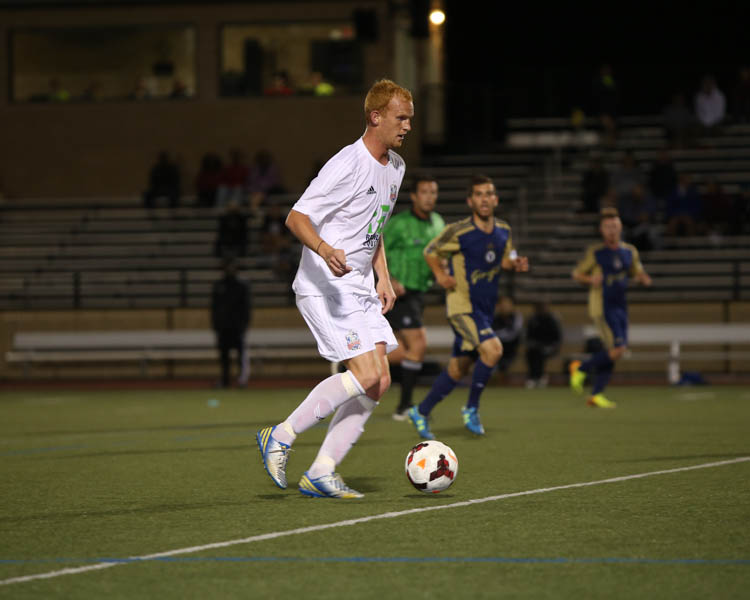 Despite enjoying a season in which it won a majority of their games, the Rough Riders finished out of the postseason with an 8-4-2 mark in third place in the Premier Development League’s Mid Atlantic Division. The team was strong defensively, allowing only 13 goals in 14 matches. 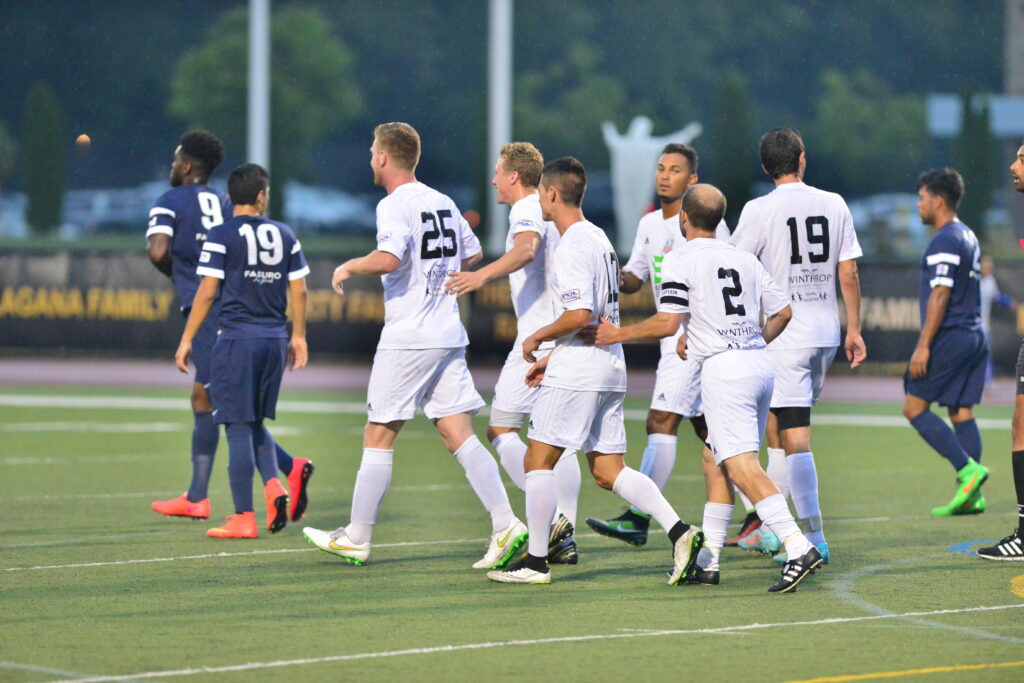 For the first time in four years, the Riders clinched a spot in the PDL playoffs. They finished the regular season in second place in the Mid Atlantic Division with a 9-4-1 mark and 28 points, only two points behind the division winners New York Red Bulls Under-23 side.

In the division play-in against the Jersey Express, Danny Kramer’s goal from instead the penalty area snapped a scoreless deadlock in the 48th minute. The Express, however, countered with a goal of its own. New Jersey added two more goals (52nd and 76th minutes) to record a 3-1 victory.

Midfielder Joe Holland was named to the All-Eastern Conference team. The Hofstra University standout scored seven goals in 18 appearances with the Riders in 2014 and 2015. In 2017, Holland was taken by the Houston Dynamo as the 10th overall selection of the 2017 MLS SuperDraft. He played five games that season. The English native also has performed for the Pittsburgh Riverhounds and Birmingham Legion (both USL Championship).

Defender Tim Parker, a Hicksville, N.Y. native who played with the Rough Riders in 2012, made his MLS debut after he was chosen as the 13th overall player by the Vancouver Whitecaps in the 2015 MLS SuperDraft. He also played in the MLS Cup playoffs later that year. Parker, who returned home to play for the New York Red Bulls from 2018-20, joined the Houston Dynamo in a trade. He also has made two appearances with the U.S. men’s national team, against Canada and Iceland in 2018.

Prior to the season, the Rough Riders became the official PDL affiliate of New York City FC. Flavio Ferri, then the team general manager, called it “a tremendous honor for our club. This affiliation will grant our staff and players unprecedented access to the resources of NYCFC. It also gives players just starting out a phenomenal platform to rise through the ranks and play at the highest levels in the U.S.”

The Rough Riders finished third in the Northeast Division with a record of 6-5-3 (21 points). Long Island had the third-best offense in the division with 26 goals scored.

Another solid season by Long Island, which took second place behind the Seacoast United Phantoms in the Eastern Conference Northeast Division on the strength of an 8-2-4 mark.

The Rough Riders endured and survived one of the most amazing Lamar Hunt U.S. Open Cup matches in recent memory on May 10. The match between Long Island and Kingston Stockade at John J. Parks Park in Massapequa Park, N.Y. included nine goals, five scored in extratime. A two-goal comeback in the second half. And four yellow cards and two reds, leaving both sides with 10 men at John J. Burns Park.

The hosts recorded a 6-3 victory that was played in a mist that bordered on a fog by the time the game ended around 10:30 p.m. “Wild is correct,” Rough Riders head coach Stephen Roche said. “It was a great game, I’m sure very good for the neutrals to watch. Not so much from the coaches’ point of view.”

The Riders boasted many heroes. Charlie Ledula, who went on to play for the New York Cosmos, struck twice in the second extratime. Tyler Botte had a goal in regulation and added an insurance goal in ET after he had to come out of the match due to a cut eye.

“It shows we’ve got great character,” Roche said. “We continued to play; we didn’t panic. We go two-nil down against a very good side. And to be able to come back and play really well and win the game, it’s got to give us huge confidence.”

With Kingston enjoying a 2-0 lead, Botte pulled one back in the 55th minute and Tom Wharf found the equalizer in the 81st minute.

Stockade FC’s Bernardo Mattos was awarded his second yellow card in the 90th minute, setting up a wild extratime. Junior Rosero snapped a 2-2 deadlock as he drilled a hard shot from outside the penalty area in the 107th minute. In the same minute, defender Shaun Foster was given his marching orders for incurring his second yellow card of the match for celebrating the goal. That left both teams with 10 players, but it didn’t stop the Riders.

Ledula tallied in the 112th minute to give Long Island a 4-2 advantage. Botte, returning after that eye injury, scored his second goal of the match to give the hosts some more breathing room only a minute later. Kingston answered back with a Mateusz Koziol penalty kick to cut the lead to 5-3. But Ledula struck yet again in the 120th minute to seal the victory.

A week later, the Rough Riders were eliminated by Louisville City FC (USL Championship) in the second round, 5-0, in Louisville, Ken.

The Riders enjoyed an impressive 9-4-1 season with 28 points and a third-place finish in the Mid Atlantic Division. However, since the top two teams in the division reached the playoffs, LI just missed out.

Ledula, who was attending LIU Post at the time, enjoyed a standout season as he was selected to the All-Eastern Conference team. He led the team in goals (10) and added an assist in 13 matches. He completed the season with a dozen goals across all competitions, an impressive total in a short season.

Later in the year, Riders midfielder and former St. John’s University standout and East Elmhurst, N.Y. resident Daniel Bedoya became the first Riders player to be signed by New York City FC. He performed in one match in 2019. He most recently has played for FC Tucson (USL League One). 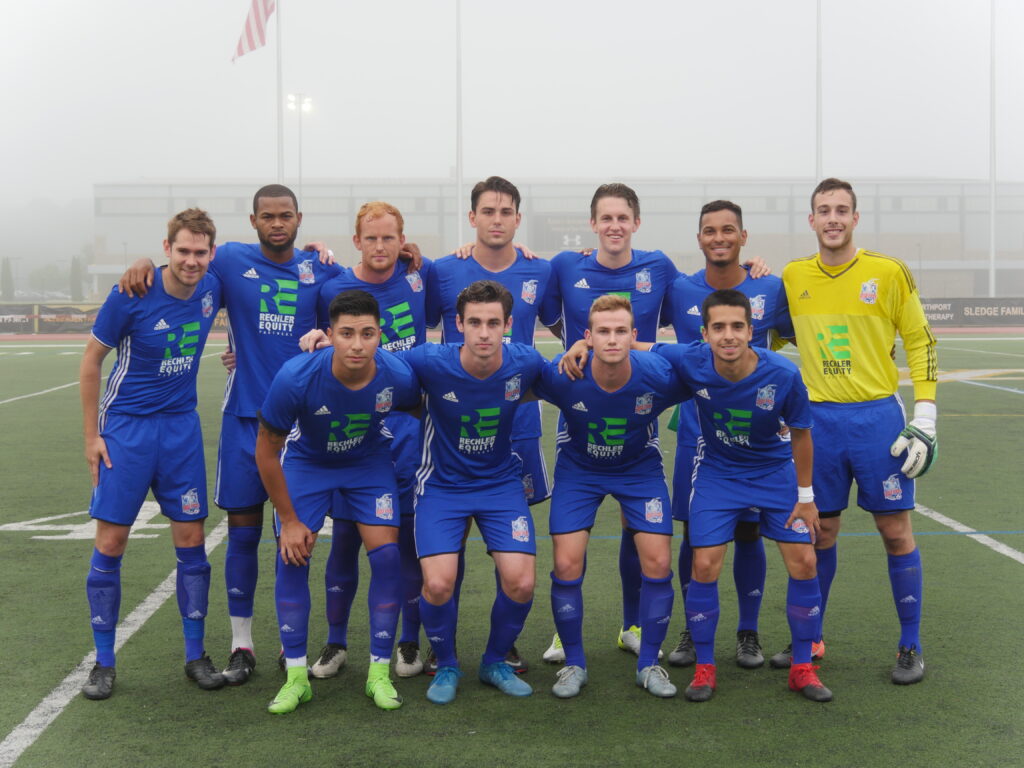 Long Island lost only once this campaign en route to a third-place finish and a 5-1-8 record and 23 points in the Eastern Conference’s Mid Atlantic Division of USL League Two (renamed from the PDL). However, it missed out on qualifying for the playoffs because the Ocean City Nor’easters due to better goal differential by the New Jersey squad.

Midfielder Manuel Ferriol, who played at James Madison University, starred for the Riders as he connected for five goals in 12 appearances.

Ferriol was chosen 40th overall in the 2020 MLS SuperDraft by FC Dallas but was not signed by the team. Ferriol, who was named to the All-Eastern Conference team, most recently has competed with FC Tucson.

The season was cancelled due to the COVID-19 pandemic. 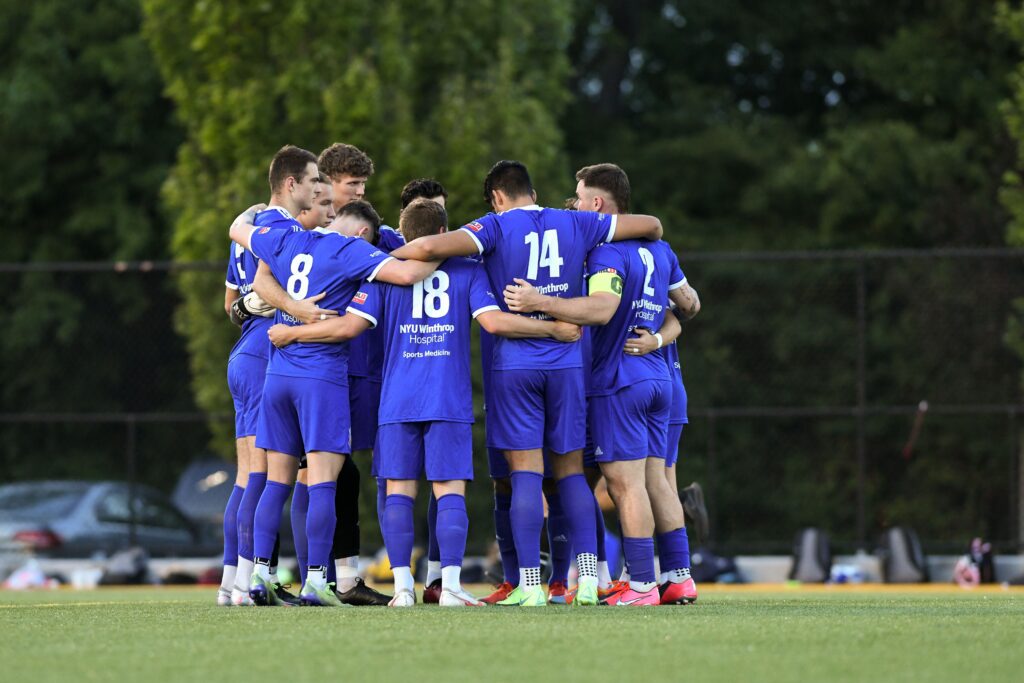 Competing in the Eastern Conference’s Metropolitan Division, the Rough Riders enjoyed one of their finest seasons. They won the nine-team division with a sterling 9-1-4 record, conceding only seven goals while scoring 21. In the conference quarterfinals, LI fell to the Seacoast United Phantoms in extatime, 2-1.

No Rough Riders player was honored by the league on the conference team, which likely showed how well the team played together instead of relying on only one or two players. 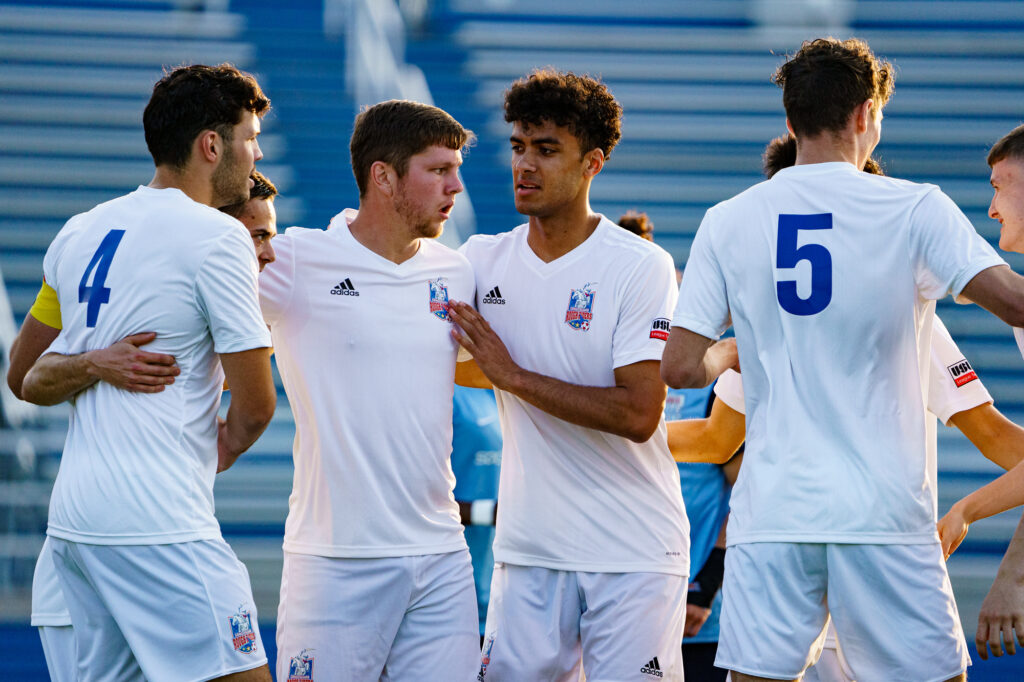 The future has yet to be written, but given the Long Island Rough Riders’ glorious past, it certainly promises to be a fruitful one