Frank Boulton, owner of the Long Island Ducks baseball team since 2000, took a plunge into soccer, becoming principal owner of the Rough Riders in 1998.

With Alfonso Mondelo becoming head coach of the New York/New Jersey MetroStars for that Major League Soccer season, Boulton turned to Paul Riley, the soccer team’s captain since its inception in 1994, to succeed Mondelo.

Riley’s first campaign was a fruitful one as the club finished in fourth place in the Northeast Division with a 17-11 record and were eliminated by a familiar nemesis, the Richmond Kickers in the Eastern Conference quarterfinals, losing in a tie-breaker, 4-3, after a scoreless draw.

Midfielder Kevin Anderson, who went on to become the Columbia University men’s coach, was named to the second team All-League side for his overall performance. Saul Martinez paced the attack with 10 goals and three assists.

Not surprisingly, Long Island finished third in the Northeast Division at 18-10 as it reached the conference playoff semifinals, losing to the Pittsburgh Riverhounds, 4-3.

A year after he was cut by the MetroStars along with former LI standout midfielder Jim Rooney on April Fool’s Day, Wolyniec began to resurrect his career with the Rough Riders. Woly, as he was nicknamed, had worked his way back to MLS, becoming one of the most popular players in MetroStars/Red Bulls history. He is the lone Red Bull to have scored in an MLS Cup final (2008) and connected one of the best goals in league history, scoring off a 53-yard pass from Adamo Guevara (2003). Rooney, who scored eight goals for the MetroStars in 1998, continued his MLS career, captaining the Miami Fusion and performing for the New England Revolution.

Midfielder Fernando Fernandes pulled off one of the rarest doubles in soccer – playing for two professional teams in as many leagues on the same day on Aug. 11 – for the Rough Riders and MetroStars. Fernandes and Wolyniec were called up to the MetroStars in an emergency because the team had six injured players and a seventh, Mike Sorber, was serving a yellow card. He was able to do that because Long Island played the Boston Bulldogs at Mitchel Athletic Complex in Uniondale, N.Y. at 1 p.m. that Wednesday. After he was replaced in the 66th minute, Ferandnes showered and drove to Giants Stadium with Wolyniec. Wolyniec sat the bench, but Fernandes replaced Miles Joseph in the 85th minute.

Wolyniec did get into a MetroStars match a week later on Aug. 18 Only five minutes after coming on for Brian Kelly, the Staten Island, N.Y. native scored his first MLS goal in the 77th minute in a 4-2 loss to the Columbus Crew. He became the fourth MetroStar to tally a goal in his first game. A day later, Wolyniec scored a goal in the Rough Riders’ 5-4 extratime loss at Lehigh Valley. 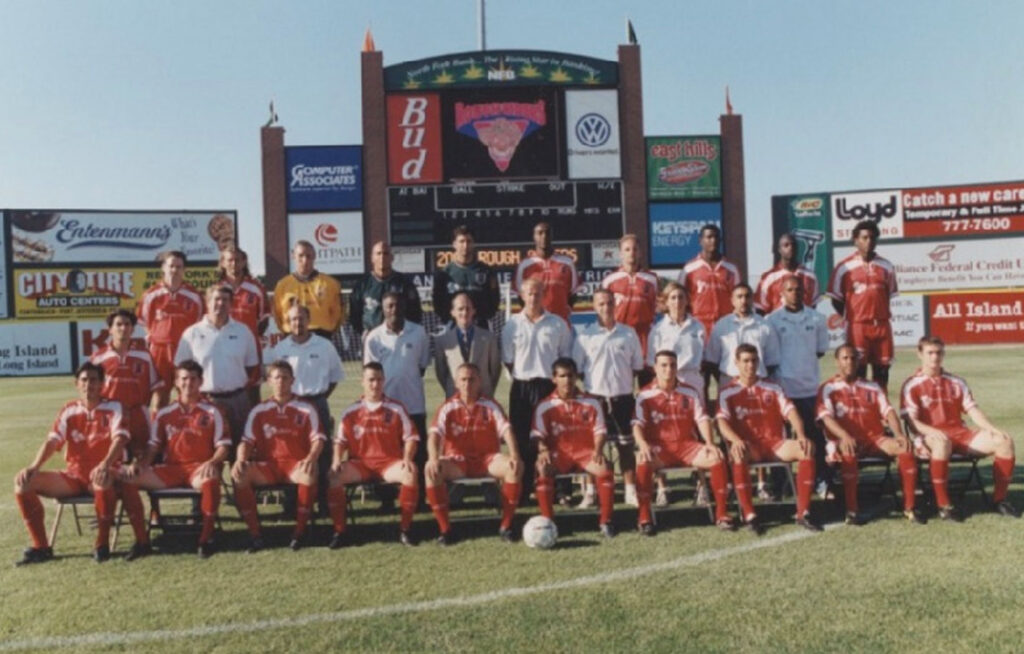 Forward Edson Buddle, then only 19, showed his potential with a stellar rookie season collecting 11 goals and four assists. Buddle went on to score 100 goals in Major League Soccer with the Columbus Crew, New York Red Bulls, Toronto FC, LA Galaxy and Colorado Rapids; he also played with Ingolstadt 04 (Germany). He also struck for three goals in 11 appearances for the U.S. men’s national team and was part of the 2006 World Cup team.

Gerry Lucey contributed nine goals and seven assists and Iratso Knights added eight goals and three assists as the Rough Riders (16-9) reached the postseason again, losing in the conference quarterfinals to the Toronto Lynx. In the Grapple for the Apple IV, the Riders grabbed a two-goal advantage before the MetroStars rallied for a 4-2 win.

One Rough Rider made national headlines. With regular goalkeeper Mike Ammann injured and Tim Howard at the Sydney Olympics, the MetroStars called up keeper Paul Grafer in an emergency role for the MLS Cup playoffs. Not only did the Port Washington, N.Y. native start, he acquitted himself quite well, backstopping the MetroStars to their first playoff series win ever, in the first round against the Dallas Burn (now FC Dallas). Grafer went to the bench when Howard returned from the Summer Games. But he became part of MetroStars folklore, playing three seasons with the club.

Defender Gary Ablett, who played 399 league matches with Liverpool, Everton, Birmingham City and Blackpool in England, played with the Riders that season and 2001.

The Rough Riders, who had called the Mitchel Athletic Complex home for most of their early years, played a few games at the baseball park in Central Islip, home of the Long Island Ducks (American League of Professional Baseball). The Ducks also were owned by Boulton.

The less said about this campaign the better. The Rough Riders (8-16-4) never found their rhythm and finished in sixth place in the Northern Division.

One of the few bright spots was forward Michael Butler, who was called up by the MetroStars because they were in an emergency situation, scored on a header in the closing seconds of extratime to lift the team to a 2-1 road win over the Tampa Bay Rowdies on July 4. It was Butler’s lone MLS appearance. He scored three times for the Riders that season. 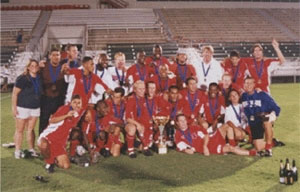 Rising from the ashes of a forgettable season, Long Island rode to one of its most successful campaigns after it dropped down from the A-League to the USL D-3 Pro League. What could go right, went right for the Rough Riders, especially during an incredible stretch run as the team won its second national title.

They were an ordinary side early on, going 4-5-1 in their opening 10 matches. They hit rock bottom in a 5-1 loss to the New York Freedoms while suffering two red cards on June 15.

The Riders rebounded a week later behind a 2-0 victory over the New Jersey Stallions, igniting a tear in which they lost only once in their final 13 games, which included the playoffs. Long Island finished the regular season winning the Atlantic Conference crown with a 13-6-1 mark. Derrick Etienne (15 goals, 3 assists) and Cordt Weinstein (12 goals, 4 assists) combined to become the lethal one-two offensive punch while Billy Gatti (1.30 goals-against average) anchored the defense, along with a young defender named Carlos Mendes. Mendes went on to have a 16-year professional career with the Rochester Rhinos, MetroStars, Columbus Crew and New York Cosmos.

They continued their roll although the quarterfinals were a tense battle with the New York Freedoms. The teams battled to a 2-2 draw after 120 minutes. Brett Davis and a Freedoms own goal put Long Island on the scoreboard. In the shootout, Gatti converted his penalty kick for Long Island’s fourth goal before Christer Arnesen beat goalkeeper and future Rough Riders owner Peter Zaratin for the game-winner, 5-4.

In the semifinals, Long Island took only three shots in the second half and put all three into the net while playing most of the final 45 minutes a man down after Karim Diallo was red carded in the 53rd minute. Georges Haba scored in the 59th minute and Weinstein gave Riders some much-needed breathing room in the 75th minute. Fausto Klinger converted a PK in the 80th minute to put a bow on a 3-0 win.

In a confrontation between the top two scoring teams in the league – the Wilmington Hammerheads (58) and Riders (54) – the Long Island recorded a 1-0 come-from-behind triumph in front of 5,768 spectators in the championship match at the Legion Sports Complex in Wilmington, N.C. on Aug. 24. The hosts drew first blood behind Anthony Maher in the 40th minute. Carlos Mendes converted a free kick off an unusual formation to knot things up in the 58th minute. Haba set up Etienne’s game-winner in the 82nd minute. Etienne, selected as MVP of the match, celebrated with a back flip.

There were plenty of unsung heroes that season, including defenders Edgar Bartholomew, whom Riley considered the team MVP, and the always reliable Steve Cadet, who went onto the become a successful local high school coach after he retired, and long-time Riders midfielder Daniel Leon. 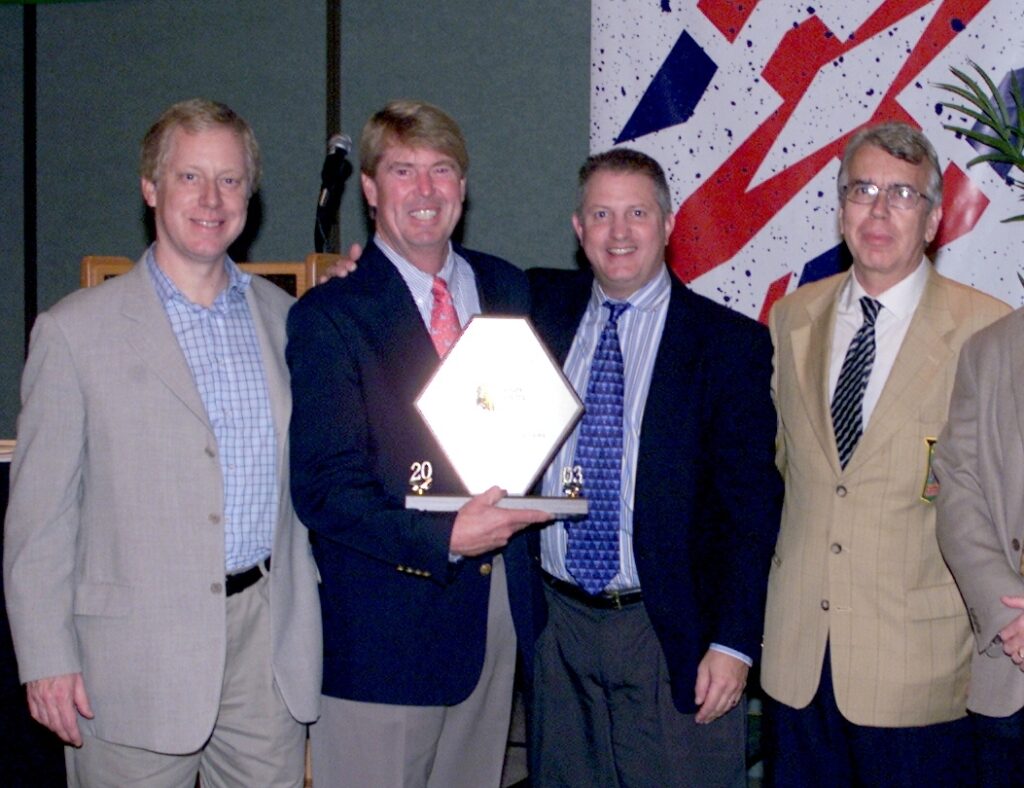 Winning back-to-back titles is difficult as the Rough Riders discovered as it moved to the USL Pro Select League. They finished atop the Atlantic Division with a stellar 13-4-3 mark, 13 points ahead of the New Jersey Stallions. Derrick Etienne led the way with 10 goals. However, they bowed out in the regional playoff finals, losing to the Stallions on penalty kicks, 5-4, after playing to a scoreless draw. Gatti finished third among all goalkeepers with a 0.83 goals-against average). LI also participated in the Open Cup, dropping a 2-1 decision to the Mid-Michigan Bucks.

It was Riley’s sixth and final season as head coach. 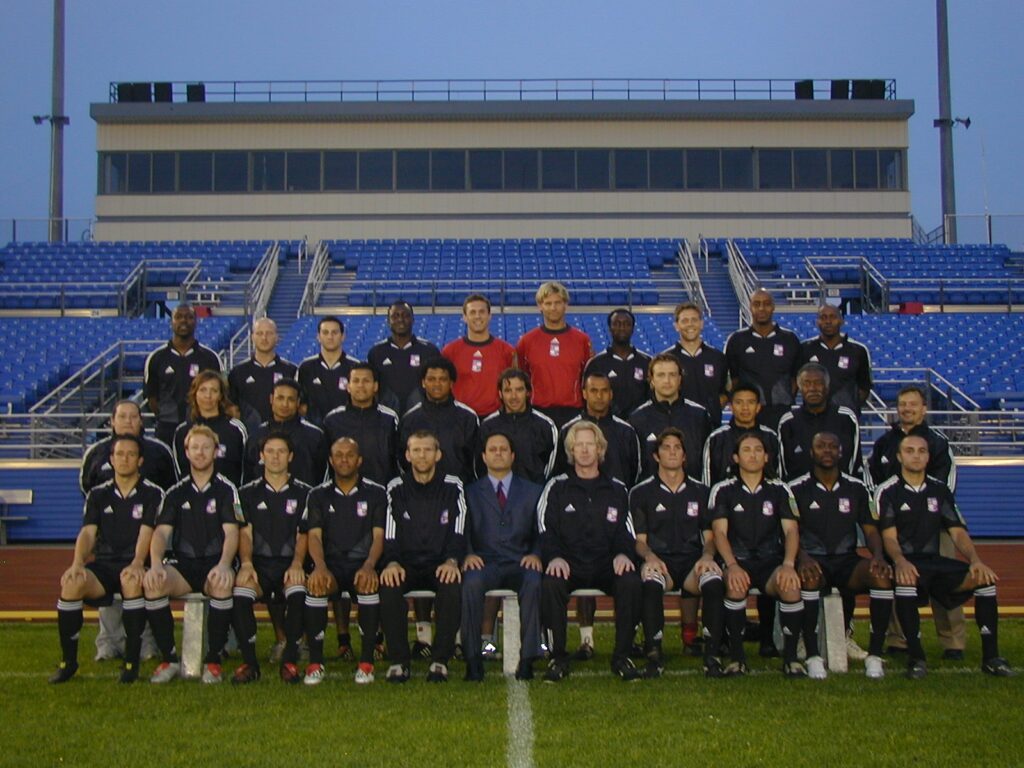 Despite the late-season additions of former Riders Giovanni Savarese and Jim Rooney, Long Island could not qualify for the postseason with an 8-11-1 record and last place finish in the Atlantic Division. Etienne again broke into double figures in goals (11).

The year wasn’t without some memorable highlights with Ronan Wiseman taking over the coaching reins.

Nine years after scoring the winning goal in his final game as a Rough Riders, Savarese returned to the team and struck twice in his home debut, a 4-1 triumph over the Jersey Falcons before 3,019 fans on July 7. Savarese, who only trained with the team three times prior to the match, scored his 40th career goal for the team in the 12th minute off a Steve Franzke cross. After the Falcons knotted things up in the 35th minute, Savarese converted a penalty kick past goalkeeper Marcin Ezerwinski in the 42nd minute. Etienne, a pastor at the Latter Glory Church in Paterson, N.J. and the father of Columbus Crew midfielder Derrick Etienne, Jr., connected twice in the second half to give the hosts some breathing room on his seventh and eighth goals of the season. Rooney assisted on Etienne’s first goal.

Rough Riders goalkeeper Daniel Sirota worked out with the U.S. men’s national team, which was in Franklin Square, N.Y. in June, training for its World Cup qualifier at Grenada.  When word came that the USMNT needed a third keeper to relieve the pressure on Kasey Keller and Johnny Walker, Sirota didn’t hesitate, calling it “an opportunity you can’t pass up.” He also got a chance to play against the national side in a friendly with the Riders, but a torrential downpour in the 12th minute forced the game to be postponed. Still, Sirota called it “probably the best soccer experience in my life.”

Former Rough Riders midfielder Chris Armas, playing with the Chicago Fire at the time, had his jersey retired during ceremonies in a July friendly against the MetroStars and became the first former player to be inducted into the club’s hall of fame.

Former Colombia international defender Wilmer Cabrera joined the team, beginning a two-year tenure with the club. Cabrera was on Colombia’s 1990 roster and played in the 1998 competition in France. He went on to be the U.S. Under-17 national coach and head coach of the Houston Dynamo. 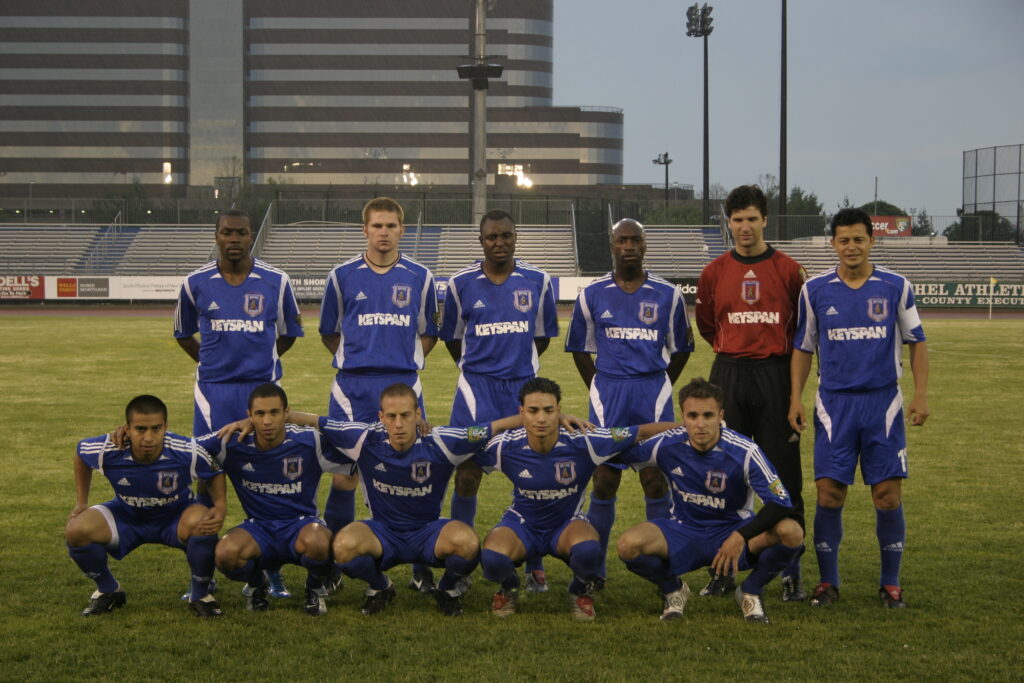 With the USL Pro Soccer League becoming the USL Second Division in 2005, the Riders (7-13-0) struggled again, finishing sixth out of nine teams while missing the postseason again. Among the highs were Moussa Sy scoring four goals in a 4-1 victory over the Northern Virginia Royals. Etienne and Sy led all LI goal-scorers (nine each). 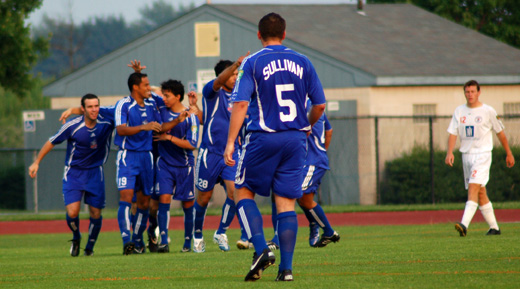 In their last season competing under the USL professional umbrella, the Rough Riders (3-12-5) endured a 13-game winless streak and scored 15 goals while finishing last among nine teams. One of the shining lights was Gary Sullivan, who earned league defender of the year honors.