A new era of Long Island women’s soccer began in 2007. One-time U.S. international goalkeeper Kim Wyant, the former face of the team, stepped down as general manager of the Lady Riders. Under the ownership of Globall Concepts and CEO Peter Zaratin, the Long Island Rough Riders acquired the W-League franchise. Globall has operated the Rough Riders women’s team since then.

A stream of talented players from Hofstra University helped fuel the team’s success, including, but not limited to the likes of Sue Alber-Weber and Brooke DeRosa. U.S. women’s national team standout Crystal Dunn and Sade Ayinde also performed for the club. 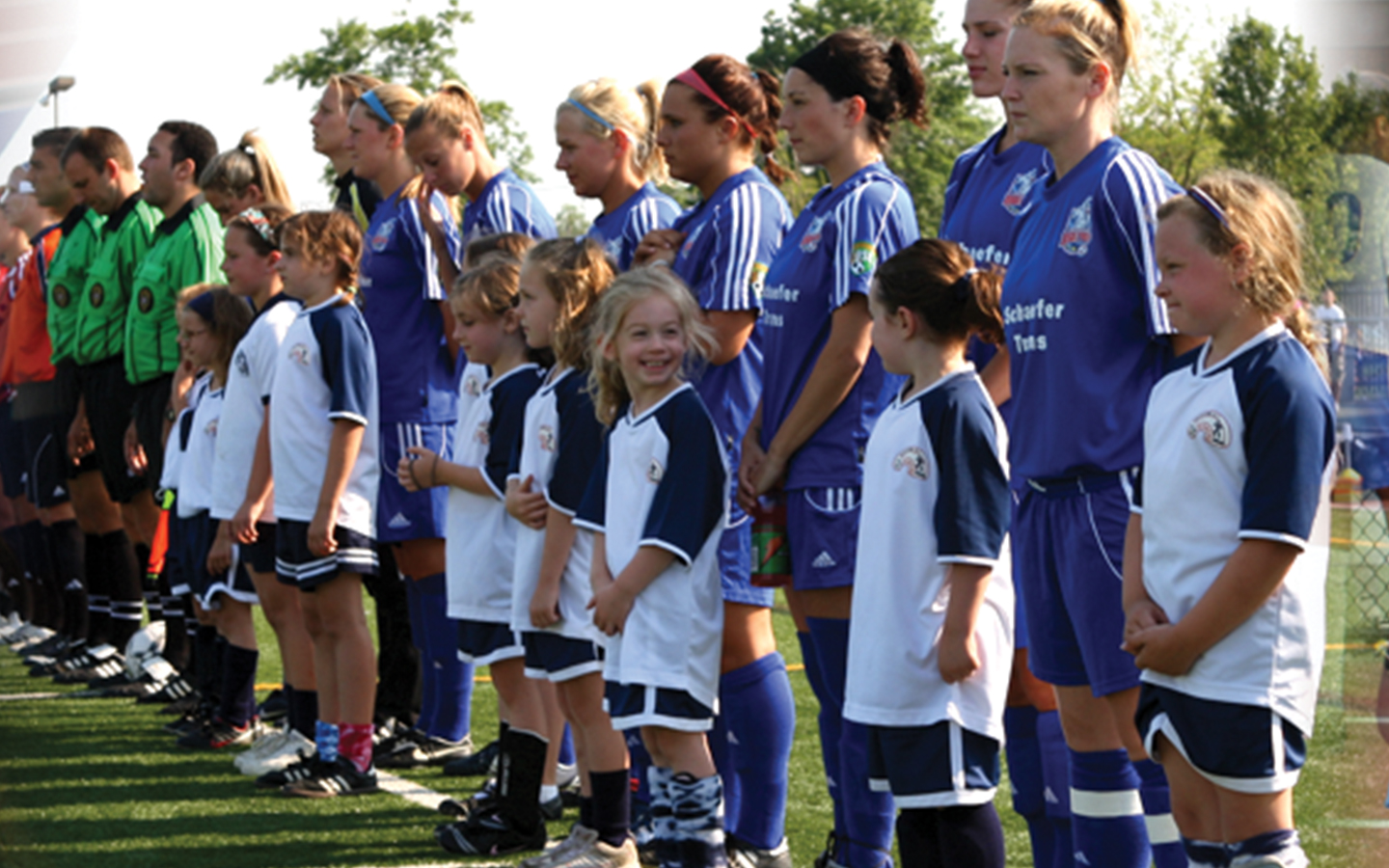 Using co-head coaches John Fitzgerald and Declan McSheffrey, Long Island (5-7-2, 17 points) finished in sixth place in the Northeast Division and did not reach the postseason.

The Rough Riders opened their season with a 2-0 loss to the New York Magic at Michael J. Tully Park in New Hyde Park, N.Y. on May 12.

After going winless in its first three matches, the franchise’s first win was recorded on June 1 at Tully Park in New Hyde Park, N.Y.

Francesca DeCristoforo anchored the Riders defense and scored a goal on an indirect free kick in a 3-0 win over the Boston Renegades. Brooke DeRosa laid the ball off to DeCristoforo, whose left-footed shot beat Renegades goalkeeper Jasmine Phillips in the 43rd minute. Kerri McCabe and Melissa Shulman added late goals. Meghan Frey, who also played for the Boston Renegades and the New York Power (Women’s United Soccer Association), registered the clean sheet. A member of the Mercyhurst College Hall of Fame, Frey went on to serve as a Rough Riders assistant coach and as head coach of the New York Surf (EDP).

Things looked much better for the Riders in their second year, as they improved to 9-3-2 mark in the Northeast Division and secured a playoff berth, behind a 29-point regular season.  Keri McCabe, who was coaching the Dowling College women’s team, struck for a natural hat-trick in the opening 46 minutes as Long Island Rough cruised to a 5-0 victory over the New Jersey Wildcats to clinch a playoff berth.

In the Eastern Divisional playoffs, DeRosa tallied off an Erin Pardini assist in the 83rd minute in a 1-0 win over the Boston Renegades at St. Anthony’s High School in South Huntington, N.Y. before the squad dropped a 1-0 decision to the host Atlanta Silverbacks in the conference semifinals.

Alber-Weber was named to the Eastern Conference all-star team. 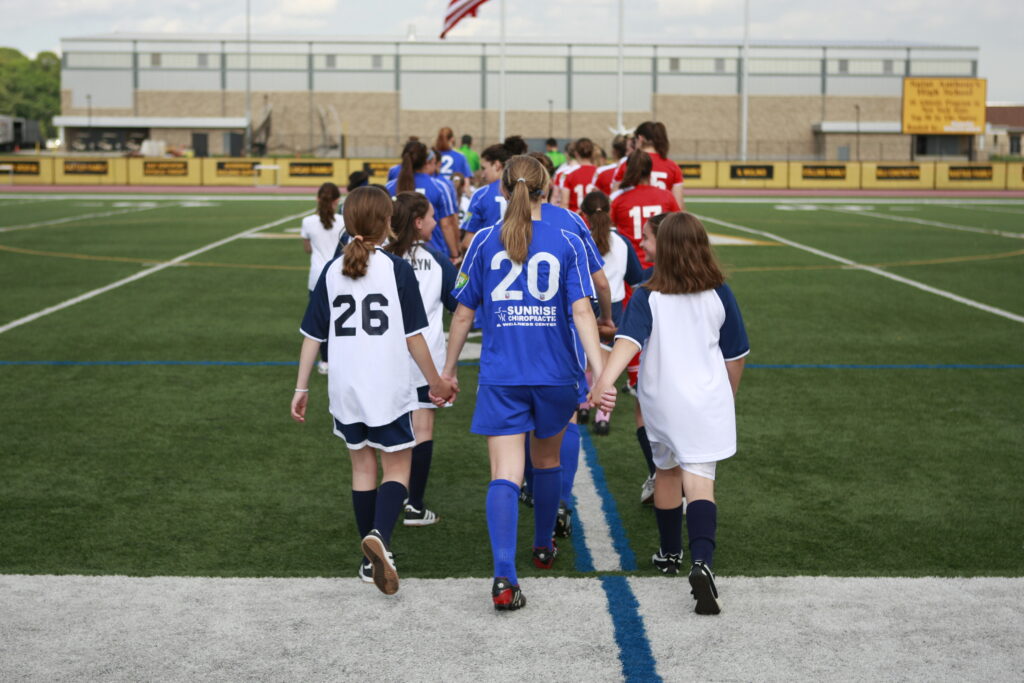 U.S. Under-20 national team midfielder Gina DiMartino joined the squad this season as LI took fourth place with a 6-7-1 record, missing out of the playoffs.

The Riders did more than compete in the W-League as it played a team of Valley Stream South High School faculty, parents and former players in a charity soccer event that summer Proceeds from the match went to Hewlett House, which has counseled women with cancer and provides treatment for those who couldn’t afford it.

Long Island rebounded with a winning season (7-5-0), but just missed out in making the playoffs by a point to the New Jersey Wildcats. 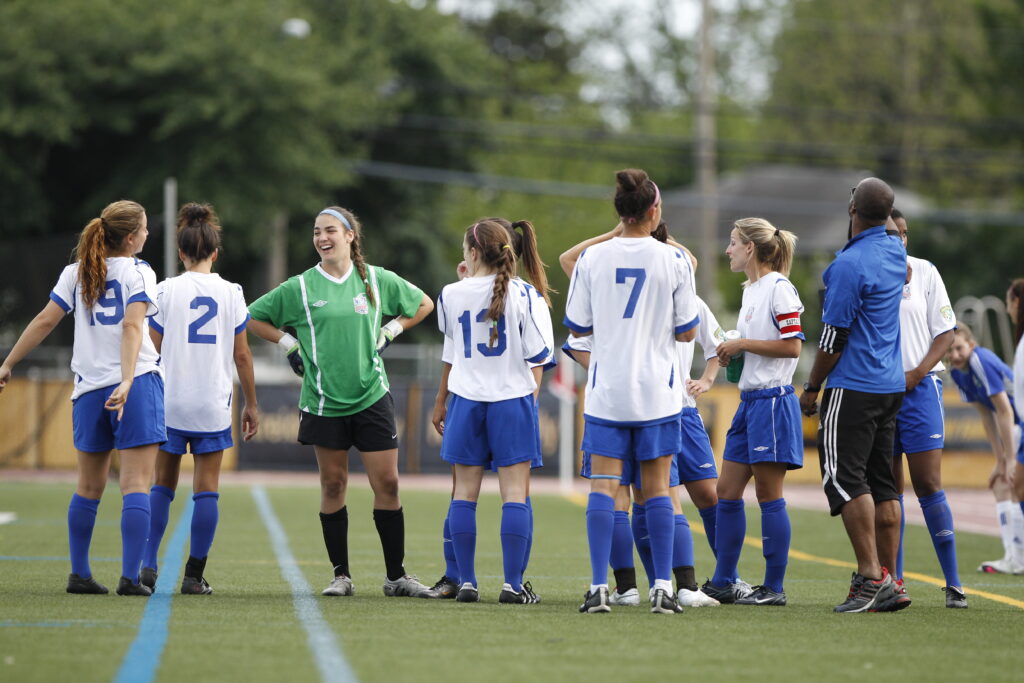 Alber-Weber continued to lead the backline as the women returned to the postseason for the first time in two years, posting a 7-1-2 mark while winning the Northeast Division and outscoring the opposition by an impressive 30-7 margin. Kalla Sciascia led the way with eight goals and one assist in only nine games. Brooke DeRosa contributed five goals and seven assists in a dozen contests. Jennifer Leaverton added five goals and an assist in seven appearances. The Riders also captured the league Fair Play Award for their overall sportsmanlike conduct throughout the regular season.

During her busy schedule for club, college and country, Rockville Centre, N.Y. resident Crystal Dunn found time to play two matches for the Riders, scoring a goal. A year later Dunn became an Under-20 World Cup champion, helping the USA to a win over Germany. As it turned out, 2012 was quite a busy year for Dunn as she won the Missouri Athletic Club Hermann Trophy and helped the University of North Carolina to its 22nd NCAA Division I title. 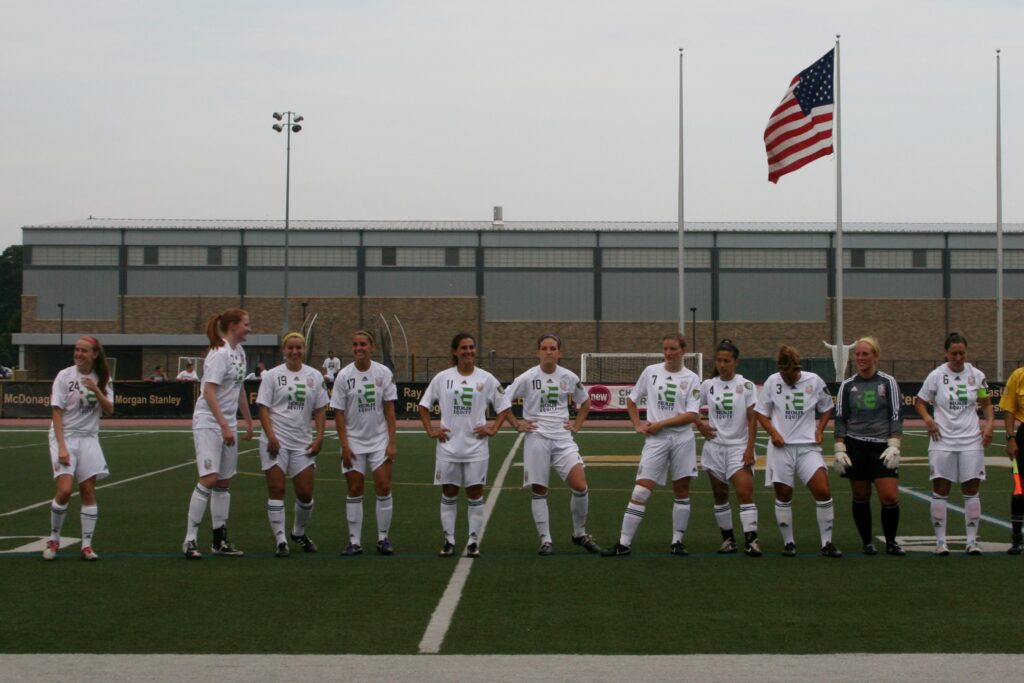 The Rough Riders continued their Northeast Division dominance with a 9-3-0 record. They also tallied 37 goals, good toe tie for second in the 29-team league. Just as impressive was their eight goals conceded in a dozen matches, also tied for second in the league. Forward Grace Hawkins (17 goals, four assists), who had one of the Rough Riders’ great individual seasons, was named USL W-League MVP and to the All-League team, as was defender Vaila Barsley.

Charlotte also continued to be the team’s nemesis as the Lady Eagles blanked the Riders, 4-0 in the Eastern Conference playoffs for the second successive season.

After a year’s absence Alber-Weber returned to the squad. The Rough Riders, however, failed to reach the postseason with a third-place finish and a 6-0-0 record. That didn’t stop defender Gabrielle Charno and midfielder Grace Hawkins (team-high eight goals) from enjoying standout performances as both players were named to the W-League All-Conference Team.

Diana Poulin, who backstopped many a St. John’s University shutout, was a mainstay in the net.

Earlier that year, former St. John’s star Barsley, who stood out for the Riders in three seasons (2009-10 and 2012 seasons), signed a professional contract with Sweden’s Eskilstuna United. Barsley eventually was named team captain and played in 164 matches and scored 25 goals. 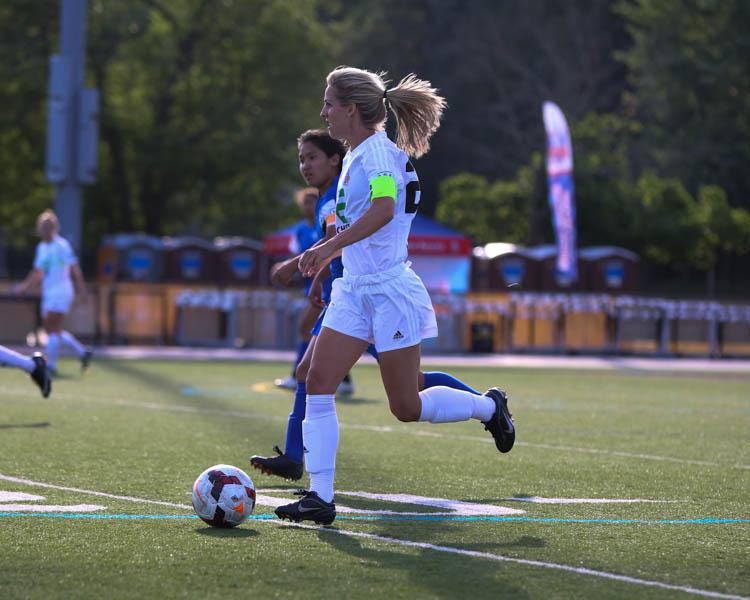 Alber-Weber earned All-League honors as a defender, but the Rough Riders (3-5-4) finished in fifth place and out of playoff contention as they struggled to find the net.

Two former LI players continued to move up the ladder as Kim DeCesare and Dunn, were selected by the Washington Spirit and Boston Breakers, respectively, in the National Women’s Soccer League draft. A year later, Dunn was voted NWSL MVP as she led the league in goal-scoring. In 2019, she played a vital role as a left back, helping the U.S. Women’s National team to the Women’s World Cup championship. Dunn also was a member of the 2021 Olympic bronze-medal winning side. 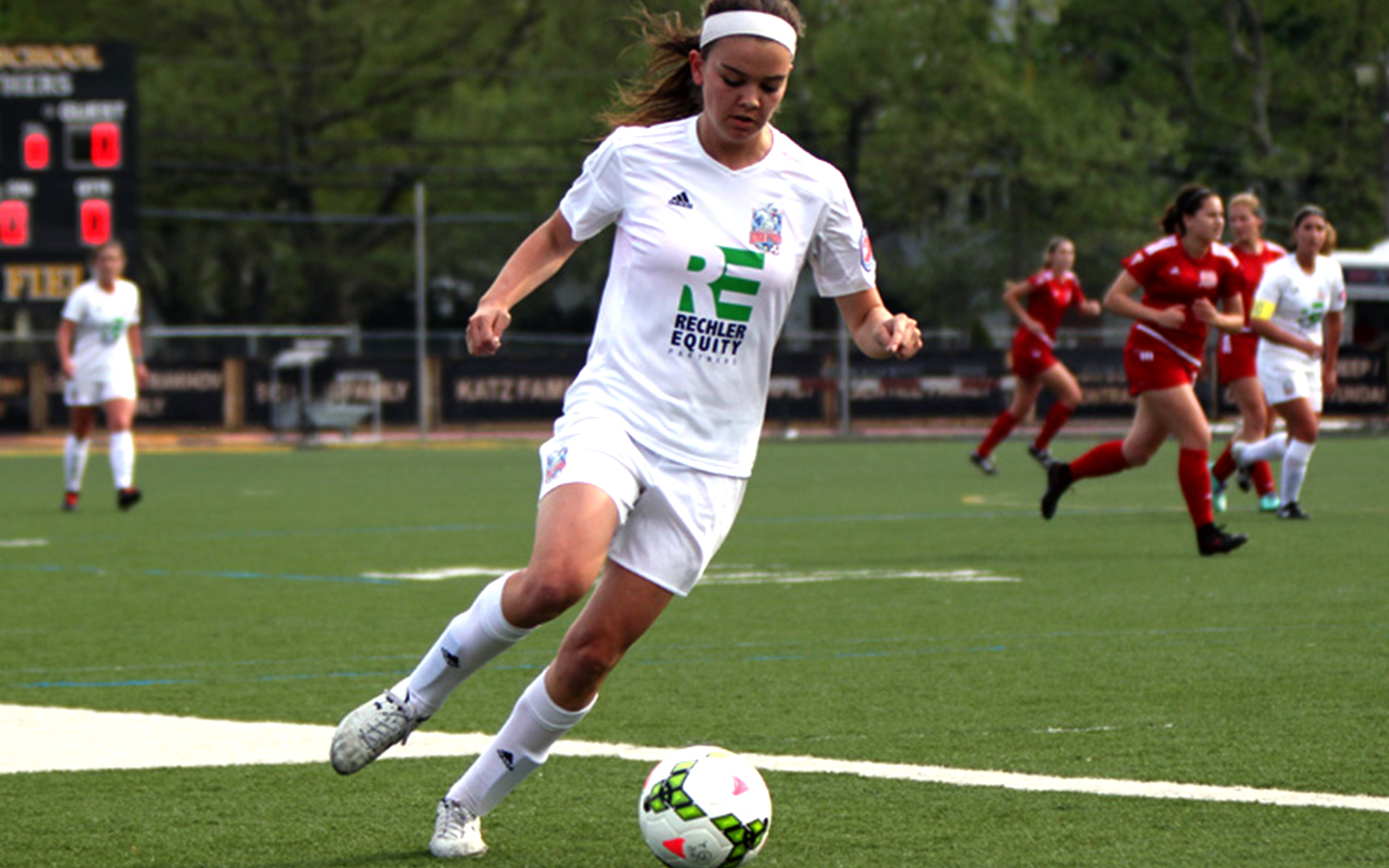 A strong defense (15 goals surrendered in 12 games) anchored the Riders, who returned to the winning column with a 6-4-2 mark in third place but finished out of the playoffs. Former Welsh international Shan Jones, a one-time W-League scoring champion, was a welcome addition, as she tallied 11 times. Jones and Alber-Weber earned All-League honors while Casie Ludemann was named to the All-Conference team.

After the USL W-League folded, the Riders joined United Women’s Soccer. Long Island registered a 4-3-3 record, taking third place in the Eastern Conference. Christina Bellero paced the squad with six goals, good enough to tie for third in the league. 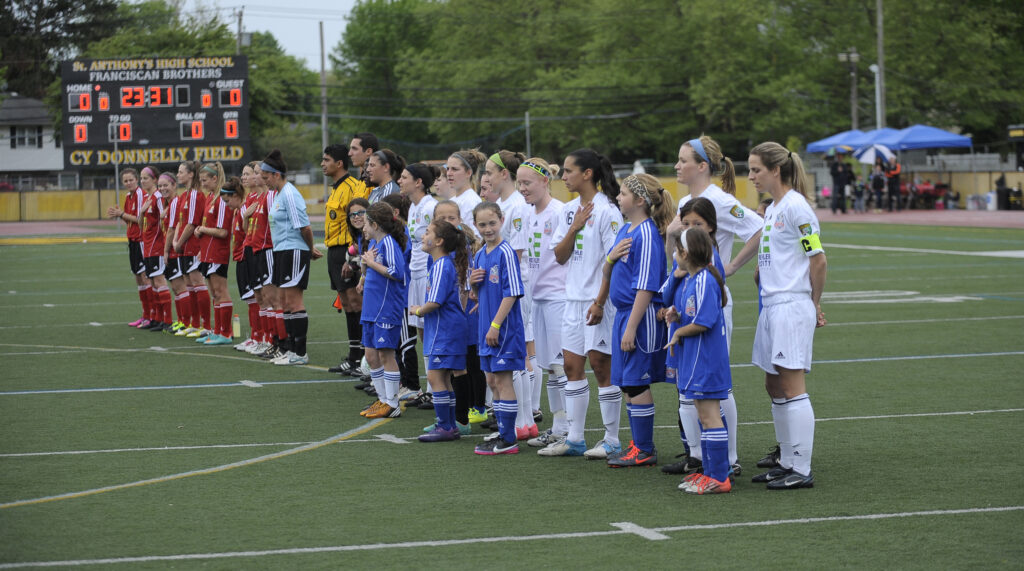 The Rough Riders (7-2-1, 22 points) enjoyed one of their finest seasons, finishing second in the Eastern Conference to first-place New Jersey Copa FC by three points. They rode a stingy defense as they conceded only 10 goals during the regular season as defender Taylor Groth was named to the All-League second team. Their attack also had its moments as the Riders scored a conference-high 35 goals. Morgan Santoro tied for third among league leaders with 10 goals and Kayla Saager added seven.

Long Island enjoyed a memorable run in the playoffs. The Riders began with a stunning 5-1 victory over New Jersey Copa as Santoro bagged a brace on either side of halftime in the East Conference playoffs to reach the national semifinals. They lost to eventual champion Grand Rapids FC in penalty kicks, 3-2, after playing to a 2-2 draw.

With Karim Diallo taking the head coaching helm, the Rough Riders just missed qualifying for the playoffs by two points as they finished in third place in the East Conference at 5-3-2 and 17 points. LI ended the season on a high note with three straight wins, which included a 9-1 rout of the Worcester Smiles.

The fourth-place Rough Riders finished at 5-5-0, but that was good enough to clinch a playoff spot. In the East Conference playoff semifinals, the New England Mutiny recorded a 3-0 win over Long Island.

Steve Price was named the Riders’ new coach, but the UWS season was cancelled due to the COVID-19 pandemic. 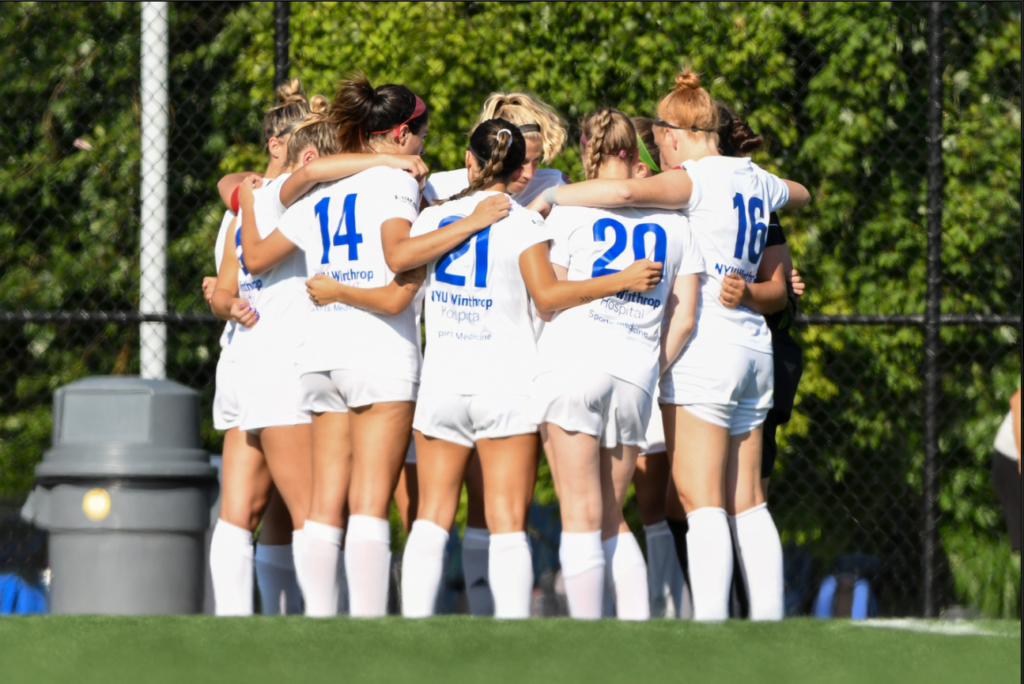 In his only season as head coach, Price directed the Rough Riders (3-3-4, 13) to a 10-place finish in the East Conference. It was the team’s final season in UWS as it joined the USL W-League for the 2022 campaign. Kelsey Hauser was named the new head coach. 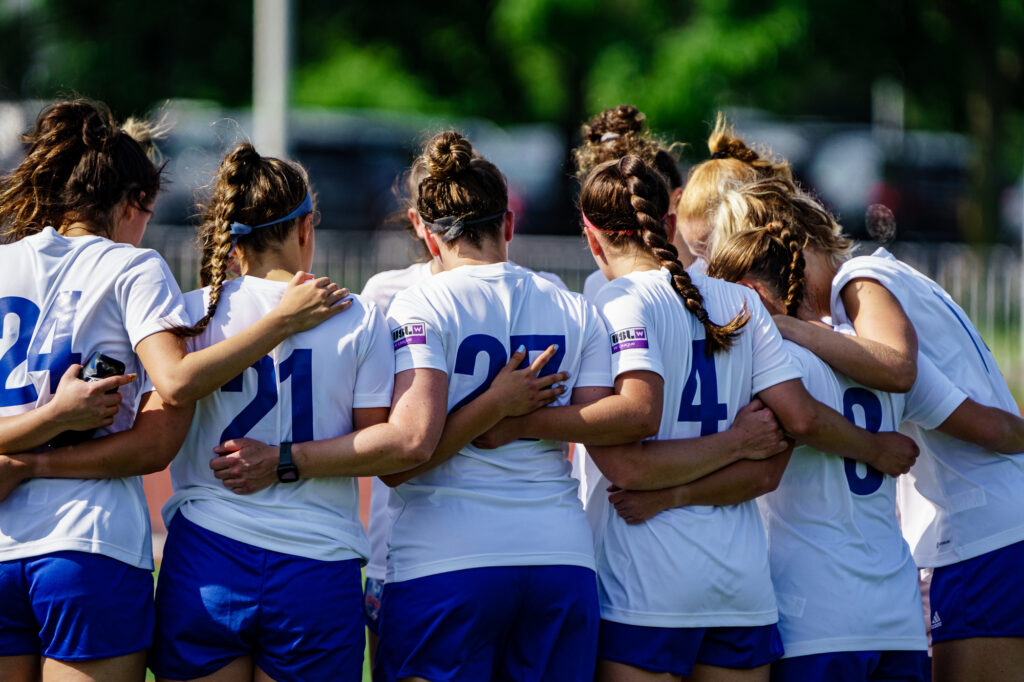