Coached by Peter Collins, Long Island won the W-League’s Eastern Division crown with a 9-1 record in its inaugural season and reached the nationals in Cincinnati.

The Lady Riders began their playoff run with a 1-0 victory over the host Cincinnati Leopards on Aug. 11. Only 18 seconds after she entered the match, Dina Grossman scored the lone goal on a scramble.

A day later, former U.S. women’s national team goalkeeper Kim Wyant, demonstrated why she was a world class goalie, making eight saves in a sterling effort in the Riders’ 1-0 result over the Texas Lightning. Shannon Sepe, off a Diana Galletta pass, tallied 90 seconds into first-half stoppage time for the game-winner.

In the Aug. 13 championship game, tournament MVP Gina Vassallo-Tucker struck twice in a 2-0 triumph over the Southern California Nitemares. She found the net in the 40th and 70th minutes. Wyant, who commuted from her Orlando, Fla home to play in league matches that year, recorded her third consecutive clean sheet. Vassallo-Tucker displayed her skill and grit and determination on her second goal. While running for a long put by Wyant, she collided with defender Susan Spencer at the top right of the penalty area with Kelly Odell out of the net. As the ball slowly rolled toward the unattended goal, Vassallo-Tucker got up, outraced her foes and tapped the ball into the net.
Wyant, who backstopped the first USWNT game in 1985 and who was named the W-League goalkeeper of the year, and Vassallo-Tucker were invited to the national side’s fall camp by then head coach Tony DiCicco, who attended the tournament.

It is not easy winning a league championship, especially when you try to go back-to-back in a league that was growing in quality and quantity. Despite conceding only nine goals as the second stingiest team in the 24-team league, the Lady Riders (7-3-0, 21) missed out on qualifying for the postseason with a second-place finish in the East Region behind the Maryland Pride (9-1-0, 27). The three division winners booked playoff berths including a wildcard team with the most points. Wyant earned league goalkeeper of the year honors for the second year in a row.

The USWNT performed at Mitchel Athletic Complex for the first time June 13, 1996, only a month before the Americans participated in its first Olympic soccer tournament for females. The USA recorded a 3-0 victory over the Lady Riders in front of 3,347 spectators. The USWNT scored ther goals the opening 20 minutes — Tisha Venturini headed in a Kristine Lilly corner kick in the seventh minute before volleying home a Mia Hamm feed from six yards a minute later before Hamm herself got on the sheet with a direct kick that Wyant (six saves) got a hand on but could not stop. Interesting note No. 1: LI native Shannon MacMillan, who was born in Syosset, N.Y., lived in Smithtown and played a few seasons with the HBC Lucky Stars (Long Island Junior Soccer League), started and played 63 minutes. The Americans went on to win Olympic gold, defeating China, 2-1, in the final. 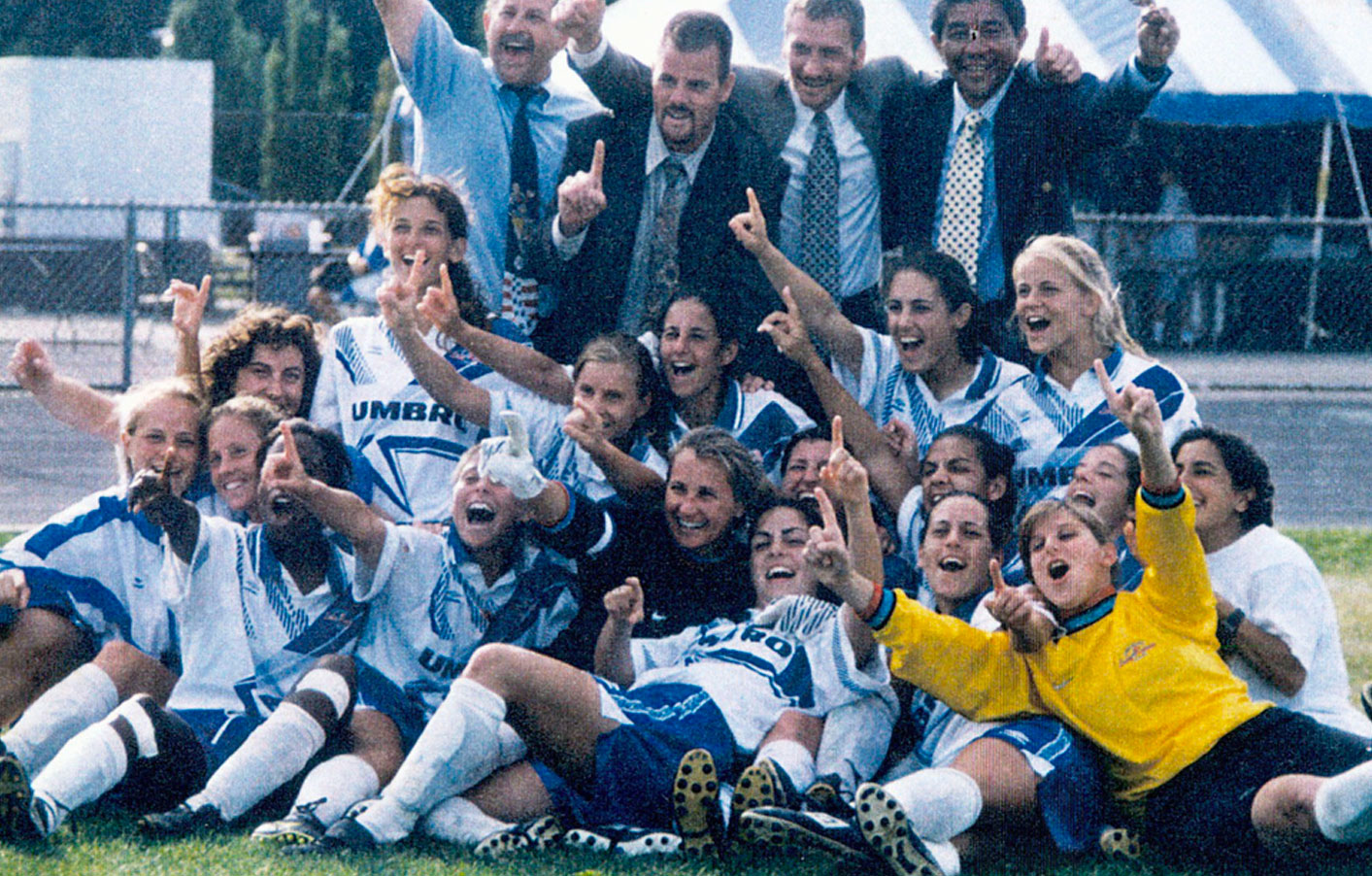 Directed by John Fitzgerald, the Lady Riders made it two national titles in three seasons. First, they won the Northeast Division crown with a 9-1-0 mark, surrendering only five goals in the regular season. That defense stood up in the divisional playoffs as LI defeated the Boston Renegades in a shootout, 1-0, to qualify for the nationals in Brockport, N.Y.

The Lady Riders had 22 rostered players, but had only 16 available. Among the missing were USWNT defender Sara Whalen, participating at the U.S. Soccer Festival, the Tietjen sisters, Jennifer (Commitments to the Northport Cow Harbor Elite at the national youth championship) and Margaret (serious knee injury), Mary Frances Monroe (U.S. Under-17 national team), Lori Perillo (sore back) and Jamie Mingoia (ankle injury).

Not surprisingly, Wyant stepped up when it counted in some close encounters. The Riders started with a 2-0 win over the defending champions, the Maryland Pride. Against the top-seeded California Nitemares, Long Island outlasted their foes in a shootout after playing to a 2-2 draw in regulation.

That set up a championship confrontation with the Chicago Cobras (11-3). Adding to Long Island’s depleted roster were injuries to Diane McLoughlin (ACL tear), Caitlin Connolly (severely sprained ankle) and Gina Prinzevalli (red-card suspension). Jen Baumann lifted the Riders to a 48th-minute lead, but Marci Miller equalized four minutes later. In the shootout, the first six shooters on each team missed or had their attempts saved before the Cobras scored in the seventh round. Debbie Johnson tied it for the LI side before Teresa Petrucelli fired home the game-winner, in a 2-1 tie-breaker victory.

Three Lady Riders were selected to the all-tournament team – Dina Grossman, Connolly and Wyant, who was named W-League goalkeeper of the year again.

Cindy Spera, who is managing director of the National Premier Soccer League, played for the Lady Riders from 1995-2000 and was a member of both championship teams.

A third-place finish in the North Division clinched a postseason spot for the Riders (10-4). The second-place Maryland Pride edged them in the division finals, 2-1. For the fourth consecutive time, Wyant was chosen as goalkeeper of the year. Laura Martin tallied a team-high 12 goals.

The Lady Riders took second place in the W-1 Division, with a 10-4 mark, only two points behind the Maryland Pride. Maryland eliminated the team from the postseason with a 4-1 opening-round win.

The highlight of their season didn’t come in the league, however. It was a friendly against the Brazilian women’s national team only a week prior to the start of the 1999 Women’s World Cup in the United States. The Lady Riders stunned the soccer world by pulling off a major upset by stunning Brazil, 2-0, before 1,642 on June 10. “I’m pretty ecstatic,” Jennifer Bauman said. “This is the greatest accomplishment of my career. The other championships were great. We just beat the No. 5 team in the world.” The Riders rode goals by Margaret Tietjen and Cristin Burtis to victory. Wyant was brilliant, especially during a seven-minute span in the second half in which she made three saves. She finished with six.

Because women’s soccer was growing at every level, it became more and more difficult for the Lady Riders to duplicate their early championship success. But they were always competitive and one of the better W-League sides.

They finished with a 10-3-1 mark and in second place in the Northeast Division, only four points behind the Boston Renegades in 2000. Despite their excellent record, the Lady Riders missed out on the playoffs because the three division winners and the top second-place team qualified for the most season. Margaret Tietjen paced the Lady Riders with 13 goals and four assists.

Forward Christie Welsh, who went on to score 20 goals in 39 appearances for the USWNT, contributed a goal and an assist in two matches. She also played for the New York Power (Women’s United Soccer Association) and Los Angeles Sol, Saint Louis Athletica and Washington Freedom (Women’s Professional Soccer).

Under new head coach Emma Hayes in 2002, the Lady Riders won the Northeast Division title with an 11-3 record. The team, however, could not qualify for the national final four. Hayes, who has directed the Chelsea women’s team in her native England since 2012, was named W-League coach of the year.

Competing under new playoff rules in 2003, the Riders (9-5-0) took second place in the Northeast Division behind the New Jersey Lady Stallions before they were eliminated by the Jersey side in the conference semifinals, 4-2.

In 2004, Long Island (11-3-0) reached the postseason for the fourth successive time, taking second place to the New Jersey Wildcats in the Northeast Division. The regular season was highlighted by one of the most remarkable games in club history that July 24 at Stony Brook University. The Lady Riders defeated the Montreal Extreme, 6-5, in extratime. Forward Michele O’Brien’s goal four minutes into extratime, off a Brooke DeRosa assist, decided matters. Prinzevalli, a defender, scored two goals and assisted on a third as the Lady Riders rolled to a 4-1 halftime advantage, but lost the lead in the second half as the Extreme rallied for four goals in the second half to tie the match in regulation at 5-5.

Throughout the team’s storied history, the Lady Riders have had many heroes, stars and several future national team players but probably none can tell the story of goalkeeper Krysten Farriella. A Sachem High School junior who had recently celebrated her 16th birthday at the time, Farriella was told she was going to start by head coach Cristin Burtis against the Lady Stallions on July 28 only minutes after arriving at Kenneth P. LaValle Stadium at Stony Brook. Farriella made several saves and Melissa Shulman tallied the game-winning score in extratime in a 1-0 win.

The Riders beat the Stallions in the Eastern divisional final, 1-0, but succumbed to Montreal, which exacted revenge with a wild 6-5 win of its own, in the Eastern semifinals.

LI (8-6-0) reached the postseason again in 2005 with a third-place finish in the Northeast Division. In the Eastern Conference semifinals, the Riders downed the Western Mass Lady Pioneers, 3-1. O’Brien bagged a brace and defender Penny Stansfield had one goal. Goalkeeper Maria Yatrakis, who participated in the 2004 Athens Summer Olympics with Greece, posted 10 saves. The Rough Riders were eliminated by the Ottawa Fury in the semifinals, 5-1. During the regular season, Prinzevalli joined Dina Case in the 100-game club.

Tom Lips took over the coaching reins for the 2006, directing the side into the playoffs with 7-5-2 record and fourth-place finish in the Northeast Division. In the division playoffs, the Lady Riders upset the third-place Boston Renegades, 1-0, as Jennie Roehrig converted a Kerri McCabe cross into a goal and Yatrakis stood out in the net again. Long Island, however, fell to the first-place New Jersey Wildcats, 3-2, in the conference semifinals.